Photovoltaic (PV) energy, also referred to as solar energy, is a clean, renewable source of power which converts sunlight into thermal or electrical energy.  The electrical energy produced through PV sources is then converted into electricity. There are three major types of solar energy:  passive, active, and thermal solar. Passive solar energy systems are built directly into a building’s blueprints (walls, windows, skylights) to improve heating and lighting efficiency. Active solar energy systems use a mechanism to collect and convert energy into a usable form. Active solar energy systems are most often seen as solar panels on roofs or in solar farms. Thermal solar energy is the process of using the sun’s radiation to heat water. This basic concept is used to reduce water heating bills or can be used in its simplest form for things such as heating a pool with a solar cover.

The most common photovoltaic source used to convert sunlight into electricity is the solar panel. Solar panels are made up of a series of individual PV cells. Typical solar modules consist of 32, 36, 48, 60, 72, or 96 cells. Modules are then grouped together to form a panel or a larger array. PV cells capture sunlight, more specifically photons, by using a semiconducting material which then converts the sunlight/photons into direct current (DC) electricity. In most cases, the semiconducting material is silicon. Solar panels can range from 100W to 415W, the highest wattage currently available from manufacturers. The amount of power in watts per panel increases as technology continues to improve. Currently, SunPower manufactures the highest power rated panel on the market. 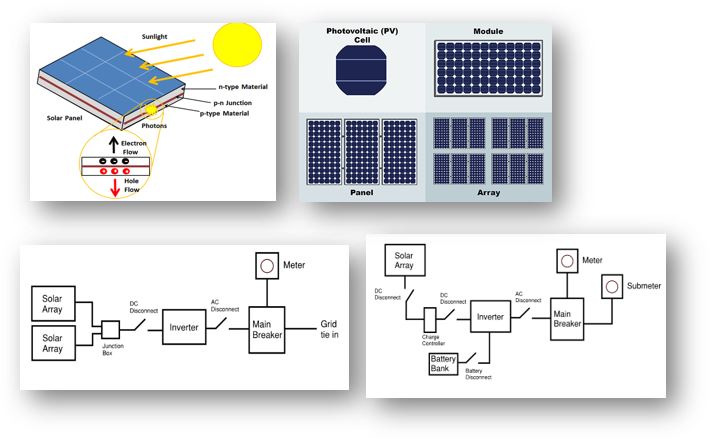 In order to design an efficient PV system, the tilt and azimuth angles must be properly calculated. Tilt angles range from 5° to 30° in increments of 5°. The azimuth angle refers to the sun’s position in the sky. 180° (south-facing) is the ideal azimuth for a PV system. Not all situations allow for a 180° azimuth however, which is why it is a critical element of the design calculations. There are multiple configurations to mount PV panels to ensure the designed PV system reaches its maximum energy production potential. Mounting is also referred to as module racking. One method of mounting a PV system is Slope Roof Mounting, which can include a rail or rail-less racking system. Another option is is Ballasted Mounting, which is utilized on flat roofs without penetrating the roof by using CMU blocks or other weighted devices to secure the unit. Finally, PV systems may be mounted on a Stand-alone rack. Stand-alone racking systems are considered when designing a solar farm in a field or parking lot where a structure might not be present.

Every PV system design follows standard steps to guarantee the client receives the most efficient design. First, designers must determine the client’s power usage (kWh). During this stage, designers should also work with the architectural team and stakeholders to investigate and decide where the PV system will be located and the method in which it will be mounted. These factors will influence the required tilt and azimuth angle of the system. After verification of the client’s power usage, tilt, and azimuth, designers then utilize the National Renewable Energy Lab’s (NREL) PVWatts Calculator. This calculator allows designers to calculate the DC Size in kW required for the PV system. Once the DC system size is determined, designers can size the solar panels, establish panel quantities, and produce a layout. Designers then convert the designed DC system to AC and ascertain the type and quantities of components required to produce the necessary amount of power to meet the client’s needs.

A real-world example of a PV design completed by PK Electrical is at the Denver International Airport.  The Concourse B Expansion required 212 kWh in order to reach LEED Gold qualification status. It was known that the roof tilt angle was 10° and the azimuth angle of the building area where the solar panels would be placed was 180°. Using the NREL PVWatts Calculator, we concluded that the DC System size required from DEN’s power usage of 212 kWh was 143 kW. The PV panel that was specified during design was a 400W panel, which meant that 358 panels were required on the roof. With those calculations, PK Electrical’s designers were able to then calculate the necessary inverter size and quantities as well as the other components to complete the designed system. Additional equipment was detailed in the final design including power optimizers, DC and AC disconnects, an EPO push button, meters, and a zig-zag transformer.

While this overview of Photovoltaic (PV) or solar energy only scratches the surface, knowing the basics of the PV design process allows for a better appreciation of what goes into the planning and design for a renewable solar project and proves that sustainability is much more than a buzzword in our industry!