As the 2021 AGC PINNACLE & Safety Award Winning project in the Sustainability & Sensitivity to Environment, History, and/or Culture Renovation category, PK Electrical would like to highlight Trinity Episcopal Cathedral in our hometown of Reno, Nevada.  Having served on the design team as electrical engineering consultant providing the power and lighting controls systems design for the renovated facility, this project holds a special place in our hearts.

With its first church service taking place in 1870, Trinity Episcopal Cathedral serves as a historic staple in Reno.  Originally a schoolhouse, this now-cathedral has a long-standing presence in the Reno, Nevada community.  Starting in the 1920’s, the Trinity Episcopal Church began their 20+ year construction timeline with the purchase of new land.  Construction took place in stages, starting with a groundbreaking in 1929 on the crypt (called the “potato cellar” by parishioners).  The cornerstone, still visible, reads “Trinity Cathedral, Erected to the Glory of God the Eternal Trinity, 1929.”  After substantial construction delays as a result of the Great Depression and World War II, the structure which still stands today was finally completed and consecrated in 1949. 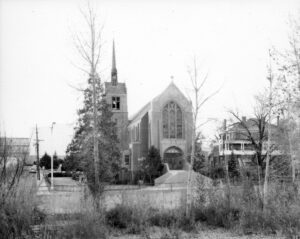 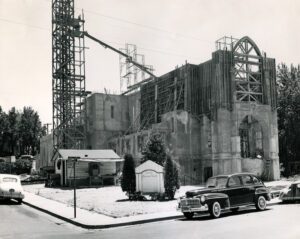 In 2016, Trinity Episcopal Church took their next step by claiming their Cathedral status through the Diocese of Nevada.  In 2020, Trinity Episcopal Cathedral was received a unanimously supported nomination from the Reno City Council to the National Register of Historic Places.  Further approved by the State of Historic Preservation Office and the Historic Resources Commission, the cathedral was added to the federal government’s official list of historic properties worthy of preservation.   Trinity “is an excellent example of the Late Gothic Revival style, and it is the Reno-Sparks area’s only example of a poured concrete church constructed entirely in this style,” as was written on their application.  This nomination was forwarded to the Keeper of the National Register in Washington, D.C. for review, leading to the eventual listing on the National Register of Historic Places managed by the National Park Service.

Designed by architect John Neal Tilton, Jr., the cathedral features an unusual poured-concrete Gothic Revival structure with a grand and soaring exterior.  In a recent renovation, stakeholders hoped to adapt the space to serve their current liturgical purposes while concurrently maintaining the integrity of the state and federal historic building designations.  New lighting features, finishes, and a new color scheme were all incorporated into the renovation design.  Updated HVAC systems, ADA-compliant restrooms, new fire alarm system, new electrical systems, and exterior access were designed for added comfort, safety, and security of parishioners.  The majority of the woodwork was restored with new pieces carefully crafted to match. Custom light fixtures were designed and specified to replicate the shape and character of the originals, which were rewired as LED devices. 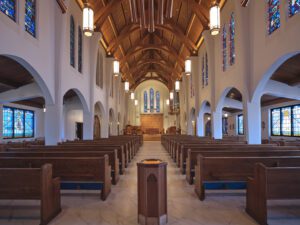 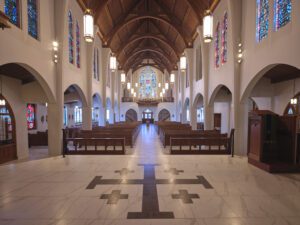 PK Electrical collaborated with local lighting designer Lee Perko with Light+Space to design and coordinate the overall cathedral lighting system. Light+Space specified the light fixtures, locations, and general control requirements, and PK Electrical was responsible for the power and controls design to the light fixtures.  Due to the historic nature of the cathedral, PK Electrical had to make special considerations regarding the routing and locations of new conduit and control infrastructure. With these concerns in mind, PK Electrical designed a wireless control system to permit for flexibility and ease of installation. The wireless control modules were installed in a concealed, yet centralized location for ease of access and maintenance. During the programming/commissioning stages of the project, several different settings were programmed into the lighting system to allow for a variety of programs, sermons, concerts, and other events and the ability to change the light scene at the touch of a button. The cathedral has sixteen pre-set lighting scenes with the opportunity add more settings upon request.

PK Electrical is honored to be a part of the team that brought new life and light into this historic treasure. Congratulations to our design and construction partners, @mercedesdelagarza and @pleniumbuilders, on this monumental community milestone! 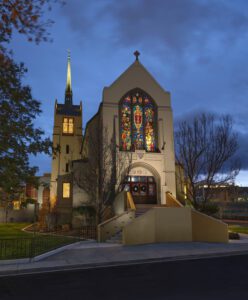